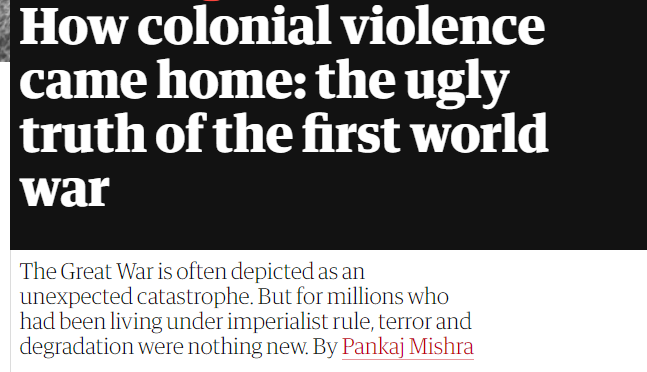 In November 2017, on the eve of the anniversary of the end of WWI, the Indian essayist Pankaj Mishra gave a lecture in the Parliament of Flanders, Belgium. His text, ‘How colonial violence came home: the ugly truth of the first world war’,  is published in English in The Guardian. MO* (Belgium Magazine) asked a number of experts to comment including  Prof. Idesbald Goddeeris, one of the members of the Global India network. He translated his intervention into English. 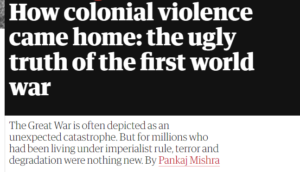 One might question Pankaj Mishra’s accuracy. Some numbers (for example the eight million Africans he claims died in Leopold II’s Congo Free State) are still subject to debate.

One might question the originality of the essay given that for more than a decade, Europe has been fully aware of the fact that hundreds of thousands of soldiers from the colonies fought in the First World War. In the summer of 2008, the ‘In Flanders Fields’ Museum in Ypres organised a special exhibition on the multicultural aspects of 1914-1918.

One might question Mishra’s scientific methodology. He states that Europe does not perceive continuity between the decades before and after 1914, but this is not entirely correct. Historians have for a long time connected the apogee of imperialism with the forging of alliances; the Industrial Revolution with the new dimensions of war atrocities; and the anti-Semitism of the Dreyfus affair with the Holocaust.

One might question Mishra’s lack of nuance. History is not a story of two poles: a suppressing North (or West) and a suppressed South (or East). Colonialism also encountered opportunism in the colonies and opposition in the metropoles. Many of the characteristics that Mishra ascribes to Europe – including racial superiority, fierce violence, economic exploitation, and social exclusion – also occur in other cultures, both before and after their contact with Europe.

One might question Mishra’s somber predictions. It is true that racism is growing and is losing its stigma in large circles of society, so that politicians and the media feel increasingly emboldened to question the conventional morale, and that Western voters harm themselves by opting for Brexit and electing Trump. However, the defeats of Marine Le Pen and Geert Wilders demonstrate that these tormenting times do not necessarily have to result in Europe’s ‘biggest calamity yet’, as Mishra warns in the last sentence of his lecture.

One might ask many questions about Mishra’s essay. I wouldn’t, however, question the common thread of his interpretation of the past, namely that ‘Europe’s long peace is revealed to be a time of unlimited wars in Asia, Africa and the Americas. These colonies emerge as the crucible where the sinister tactics of Europe’s brutal 20th-century wars – racial extermination, forced population transfers, contempt for civilian lives – were first forged.’

One could even go further. The decades following 1945 were not – as Mishra claims – an ‘exceptional’ period of democracy, welfare and individual liberties. The struggle against communism also legitimized the decades of forgotten wars of decolonization, economic neo-colonialism, proxy wars in the Third World, and a double standard in international politics. The First World War was not a watershed, but neither was the Cold War. It only postponed what was due to emerge anyway after decolonisation and continuing global inequality: the migration, frustration, and radicalization of today.

Pankaj Mishra is correct when he states that Europe suffers from amnesia, or worse still, tends to wipe out the darkest pages of its history. We should act against this and give the floor more often to opinion makers such as Mishra. This is important, both for our credibility towards the outside world and for the cohesion of our own society, which is becoming more and more diverse. Congratulations on the initiative, and thanks to MO* for translating and publishing Mishra’s essay!