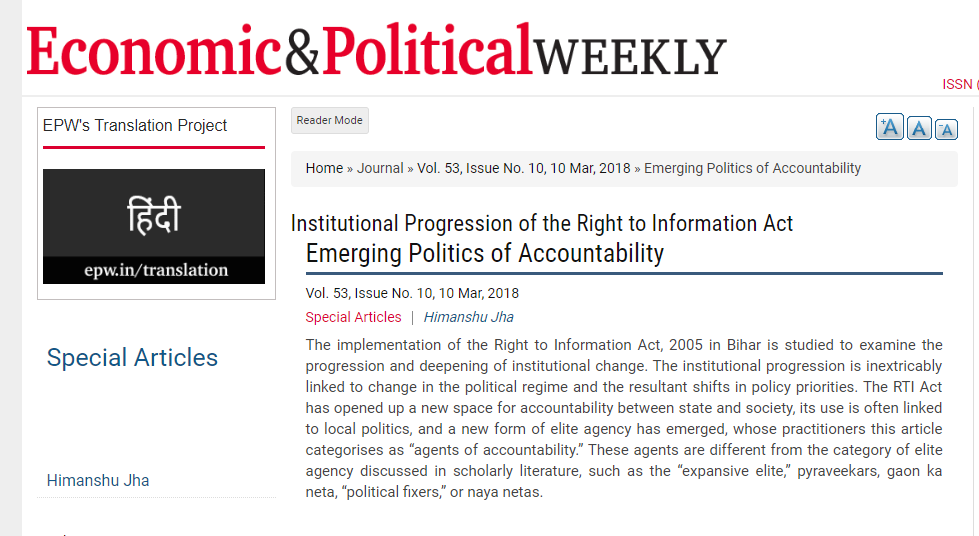 Read Dr. Himanshu Jha’s article on the Politics of Accountability in India

Emerging Politics of Accountability: Institutional Progression of the Right to Information Act

Until 2005, governance processes in India were shrouded in secrecy, a throwback to colonial times. The Right to Information (RTI) Act, promulgated in 2005, provides Indian citizens with a legal regime for accessing government information. It represents institutional change. But, has this institutional change in legal norms resulted in related social, political and administrative change as well? If so, to what extent? This article studies the period after institutional change which should be seen as one of “institutional progression.” To examine the extent of institutional progression, this article examines the implementation of RTI in the eastern Indian state of Bihar. Bihar presents a puzzle: on the one hand, it is regarded as chronically backward in terms of socio-economic indicators, and also as a place where caste divides run deep; on the other, the extensive use of RTI points towards high levels of socio-political consciousness. The puzzle deepens when one considers Bihar’s reputation for bad governance: it is believed that the state is run by a corrupt nexus of bureaucrats, contractors, middlemen, and socio-politically dominant groups. To be sure, free flow of state information in the public domain through RTI will expose the rooted corrupt nexus and will work against their interests.  Moreover, the state has been notoriously labelled as an example of a “failed” state, viewed by the policymakers as pulling India’s development behind. Recently, Amitabh Kant the CEO of Niti Ayog (government’s top policy-making body) lamented that “eastern part of India particularly states like Bihar, UP, Chattisgarh, MP, and Rajasthan are keeping India backward”.  Yet the initial implementation of RTIA in Bihar shows a robust and developed state capacity. What engenders state capacity in a weak state like Bihar?   In this sense, the case of Bihar presents us with what is called a “tough case” (King et al 1994) or a “least likely case” (Eckstein 1975).

Related scholarly work on the implementation of RTI Act has highlighted numerous problems: lack of awareness among citizens, barriers to the use of law, bureaucratic indifference, rejection of appeals, and rising pendency. This article, in contrast, digs deeper to explore patterns of RTI use at the sub-national level in terms of the social, political, and administrative changes it has caused. On the basis of fieldwork undertaken in two phases (2014 & 2015), this article argues that the institutional progression is inextricably linked to change in the political regime and the resultant shifts in policy priorities. The RTI Act has opened up a new space for accountability between state and society, its use is often linked to local politics, and a new form of elite agency has emerged, whose practitioners this article categorizes as “agents of accountability.” These agents are different from the category of elite agency discussed in scholarly literature, such as the expansive elite, local pyraveekars, gaon ka neta, political fixers, or naya netas.